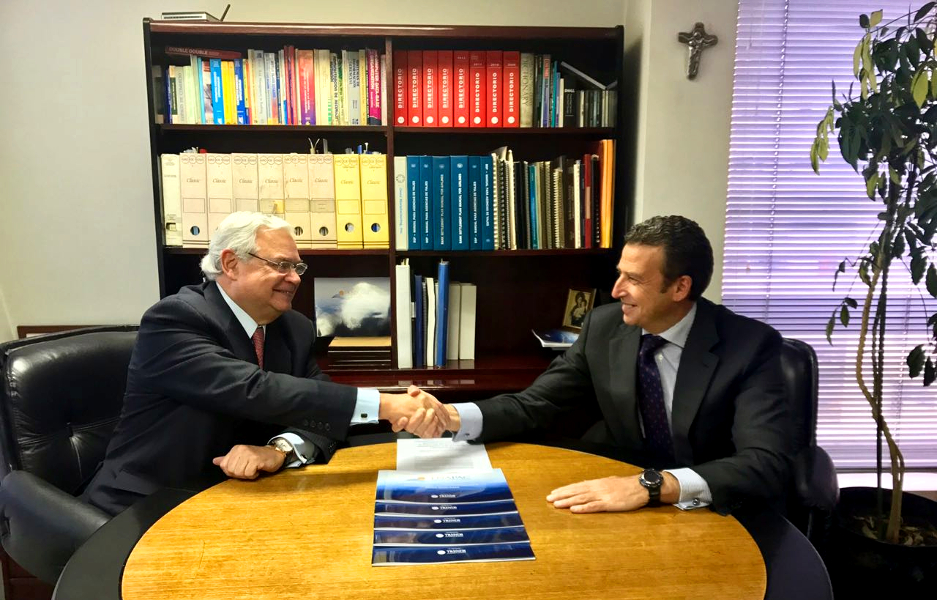 The project called “ENAPAC” (abbreviaton for the spanish name “Energías y Aguas del Pacífico”) will be the first Multiclient desalination plant in Chile, the largest in Latin America, the first large scale plant powered with photovoltaic energy and one of the most advanced projects in the world, combining reverse osmosis desalination with solar energy.

TRENDS Industrial and Almar Water Solutions signed a Memorandum of Understanding (MoU) to collaborate on the development of solar powered desalination project for the Atacama region in Chile: ENAPAC. Almar has become an equity investor in the project and the MoU specifies a further Joint Development Agreement for the complition of  ENAPAC, one of the largest solar powered desalination project in the world, which requeries a base 500 millions USD investment.

Rodrigo Silva, TRENDS Industrial’s CEO, and Carlos Cosín, Almar Water Solutions CEO, sealed the agreement committing to seek the economic and technical concretion of the project, through the strategic partnership of both companies.

About the MoU, Rodrigo Silva stated “comes to consolidate the work of several years in which we have developed a Sustainable project from the socio-environmental point of view, as well as from the economic perspective for the advantages of the Multiclient model of ENAPAC, in which economies of scale are taken advantage of, reduces the impact on the territory and improves efficiency, as we have been seeing in large-scale mining projects in Chile, which have opted for collaboration“.

On the relevance of the signed agreement, Carlos Cosín assured that “this alliance consolidates Almar’s interest in developing innovative and state-of-the-art technology projects combining desalination with solar energy, while at the same time sealing our commitment to the long-term success of the ENAPAC project, particularly with its potential clients to whom we can ensure the reliability of the water supply, which is so urgently needed in Atacama and for which we hope that ENAPAC will help alleviate, in part, the severe water scarcity in the region”.

The ENAPAC project is part of the list managed by the Office of Management of Sustainable Projects of the Chilean government Ministry of Economy and, therefore, both executives visited today the Chilean Economy Minister, José Ramón Valente, and his team to present the state of progress of the project and the credentials of the companies that will develop the initiative.

ENAPAC consists of a seawater desalination project for Atacama that will be supplied with it’s own source of photovoltaic energy. With an estimated initial investment of UDS 500 million ENAPAC will become the largest desalination plant in Chile and Latin America, for its maximum capacity of 2.600 l/s, and will also be the first Multiclient, the only large-scale solar powered (100MW) and one of the most advanced projects in the world with a combination of reverse osmosis desalination and photovoltaic energy.

ENAPAC has been for about a year in the process of environmental evaluation from Chilean authorities with positive advances, so a favorable resolution is expected during the second half of 2018. Also, the project has been nominated for the world’s most important Design and Sustainability award, the Design to Improve Life INDEX AWARD, also known as the “Nobel prize of Design”, which is sponsored by the Danish crown.

TRENDS group of companies is based in Chile and operates in various markets in the rest of America such as Argentina, Brazil, Peru, Bolivia, Panama and others. It’s business areas cover different products and services related to outsourcing, consulting, technology, electronic commerce, energy and others, in areas such as finance, telecommunications, health, education, communications and more. The group is developing ENAPAC through it’s subsidiary TRENDS Industrial S.A., as owner.

Almar Water Solutions specializes in the design, financing, operation and maintenance of water infrastructure. It is part of Abdul Latif Jameel Energy & Environmental Services (ALJ), one of the most important business groups in the Middle East, North Africa and Turkey region, with presence in 30 countries on five continents and with more than 17,000 employees around the world.

In Chile, ALJ already has a presence through Fotowatio Renewable Ventures (FRV), it’s power generation subsidiary and world leader in the development of renewable energy projects, which was awarded 540 GWh in January in Chile, corresponding to 25% of the total electricity open to tender.